Many thanks to Rembert Heuser for giving a whole afternoon to take Chloé Galibert-Laîné and I on a walking tour through Adornoland.  It isn’t quite touristified, but there are peculiar appearances on view, like Adorno’s desk encased in a giant glass display in the middle of the campus plaza, with his papers on the desk. I asked Rembert what they were, and he replied, they are the drafts of his seminal essays “Notes on the Video Essay” and “The Video Essay as Form.” 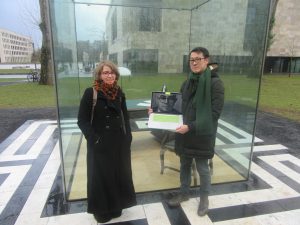 I brought my own Adorno to pay tribute. Devoted readers may recall that “Adorno” the MacBook suffered a seemingly fatal water accident en route to Berlin, only to be resurrected by the whimsical techies at Fuxdata. And so it was only fitting that I bring my digital companion, having survived its critical condition, to bow in gratitude at the Temple of Critical Theory (aka Adorno’s old home).. 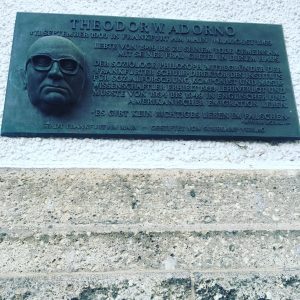 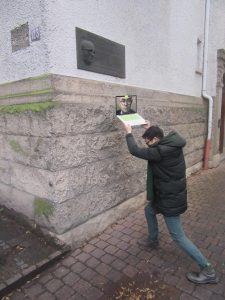 We ended the tour with Rembert in a classroom where Adorno presumably taught, and bid goodbye with fittingly mediated salutes. I will return to Frankfurt in April to teach two media seminars at Goethe Universitat: “The Lives of Images” and “Social Media Realities and Viralities”. 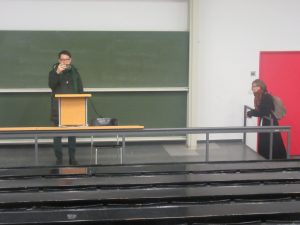 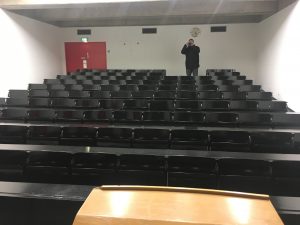