In my previous entry I discussed how YouTube’s sudden shutdown of my account triggered publicity and expressions of support for my work. I neglected to mention some especially important supporters at the time: the organizers of a project called Kunst der Vermittlung (The Art of Mediation), a website and screening series drawing attention to “Filmvermittelnden Films,” or works of cinema that focus on the cinema itself.

As described in the project website (via Google Translate): END_OF_DOCUMENT_TOKEN_TO_BE_REPLACED

My project continues to archive and catalogue all of the video essays I have made over the last ten years.  Previous entries looked at 2007, when I began, and 2008, when I engaged mainly in collaborations with different critics and began to make video essays for pay.

First, here’s the Vimeo album of the video essays I produced in 2009. I produced 20 video essays in this year, but only 16 are accounted for in this album, for reasons explained further below.

In 2009 I made the last video essays for Shooting Down Pictures, the personal blog project that initiated my video essay production in order to more deeply investigate the films I was writing about. I continued collaborating with others, such as with film scholar Kristin Thompson on the silent film classics La roue and Varieté; and a video essay on Greta Garbo’s first starring role, with commentary by Swedish film scholar Jan Olsson.

I also collaborated with a longtime internet friend Christianne Benedict, with whom I had interacted for years from the now-defunct message boards of the Internet Movie Database. We produced this video essay on The World According to Garp, which I’m particularly fond of, because it was my first real experience learning about and appreciating issues of transgender identity, specifically within film history. In light of recent setbacks for trans and LGBTQ rights under the current US administration, I think this video essay is as relevant as ever.

Just a couple days after this video essay was first published on YouTube in January 2009, it was taken down – but not because of anything to do with its transgender subject matter. This video – and every video I had made up to this point – came up against another kind of rights issue when YouTube shut down my account due to a new copyright policy they had adopted overnight. END_OF_DOCUMENT_TOKEN_TO_BE_REPLACED

And made an Oscar video for this year. I couldn’t help myself, old habits die hard. But I left the answer to the question open – watch and decide for yourself.

But this will be the only Oscar video I made this year.

The 33 “Who Should Win The Oscars” video essays I made from the previous five years can all be found here. 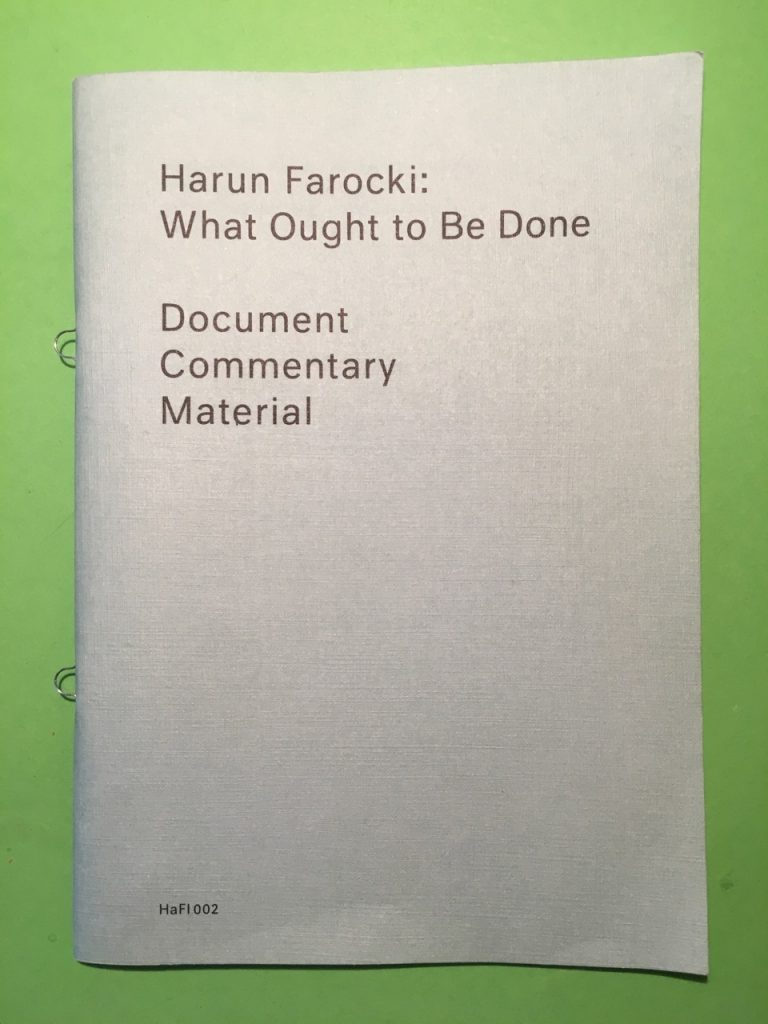 This is one of the initial publications issued by the Harun Farocki Institut, a proposal written by Harun Farocki in 1975-76 calling for the establishment of an institution dedicated to a new mode of documentary practice. It would be forty years later, and two years following his passing, that his vision would materialize in the form of the Farocki Institut.

The publication is organized into three parts: “Document” refers to Farocki’s letter; “Commentary” refers to an accompanying essay by HaFI co-directors Tom Holert, Doreen Mende and Volker Pantenburg providing historical context for the letter; and “Material” refers to an additional letter written by filmmaker Peter Nestler in response to Farocki’s. This may not have been the intention of the publishers, but as I interpret it, this cover could be read as Farocki’s procedure for how to produce documentary work: END_OF_DOCUMENT_TOKEN_TO_BE_REPLACED

“Whether I work on my own material or with found footage, I need to become acquainted with it. And through different not fully conscious processes I can either accept the material or not. But the is not so much about the material of the picture carrier, but more importantly that the sequences and the elements of the films themselves are to be considered as ‘material’ and not as something finished.”

“There is this beautiful conversation between Duras and Godard where she says in making a film she has to make an effort to make it unfinished. And Godard answers: ‘If I finish a film, it is already taken apart!'” 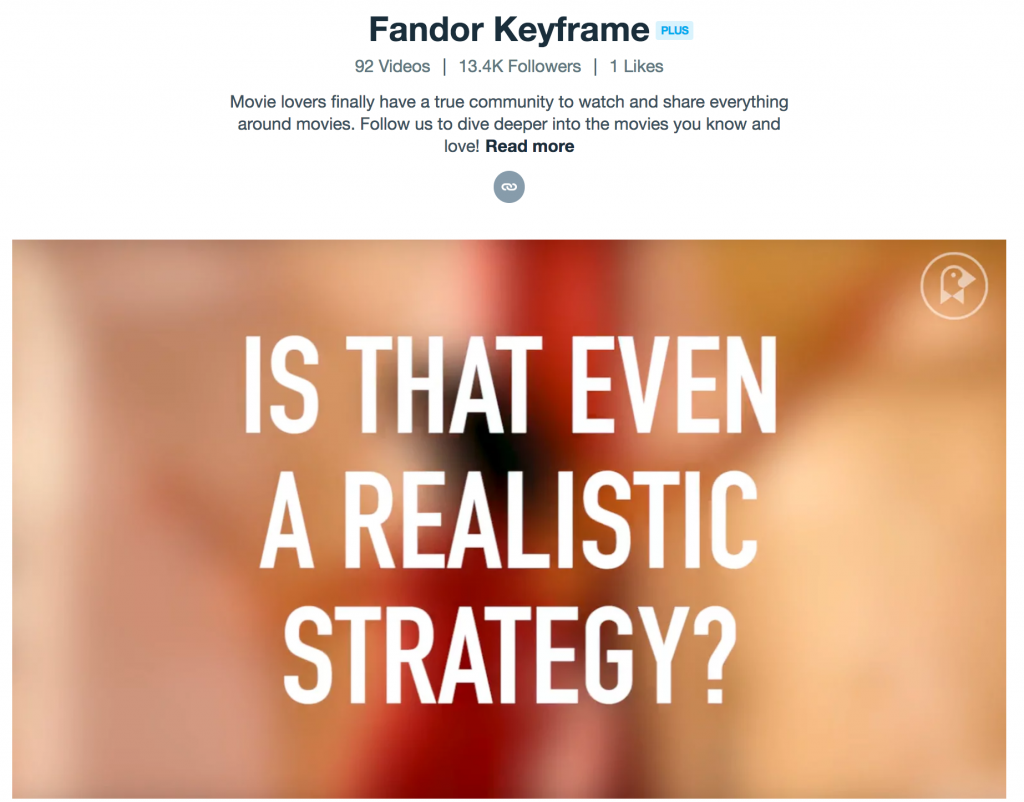 END_OF_DOCUMENT_TOKEN_TO_BE_REPLACED

I’m progressing through my project of archiving and cataloging every video essay I’ve produced since I started making them 10 years ago. Previously I reflected on the first videos I made back in 2007. In 2008 I produced 37 video essays, all of which can be found in this album I curated on Vimeo, except for one made with Karina Longworth on the film The Draughtsman’s Contract (The video is no longer online and I don’t have the file with me in Berlin to upload). But that is just one of many video essays from 2008 that I made in collaboration with a fellow film critic or cinephile – or in the unique case and location of the video below, multiple critics at once:

31 of the 37 videos I made in 2008 were collaborations. This was a period when I was using this form to connect more closely with members of the online film criticism community whom I held in high esteem. By inviting them to work on a video essay together, I’d absorb their individual ways of looking at films, and then adapt their insights into an audiovisual form. It was a very enriching process, not unlike a self-designed series of video essay tutorials on film analysis with the best possible thinkers. END_OF_DOCUMENT_TOKEN_TO_BE_REPLACED

Andreas Busche, film editor at the German national newspaper Der Tagesspiegel, interviewed me about my work and current time spent at the Harun Farocki Residency. The feature article is in German and can be found here. 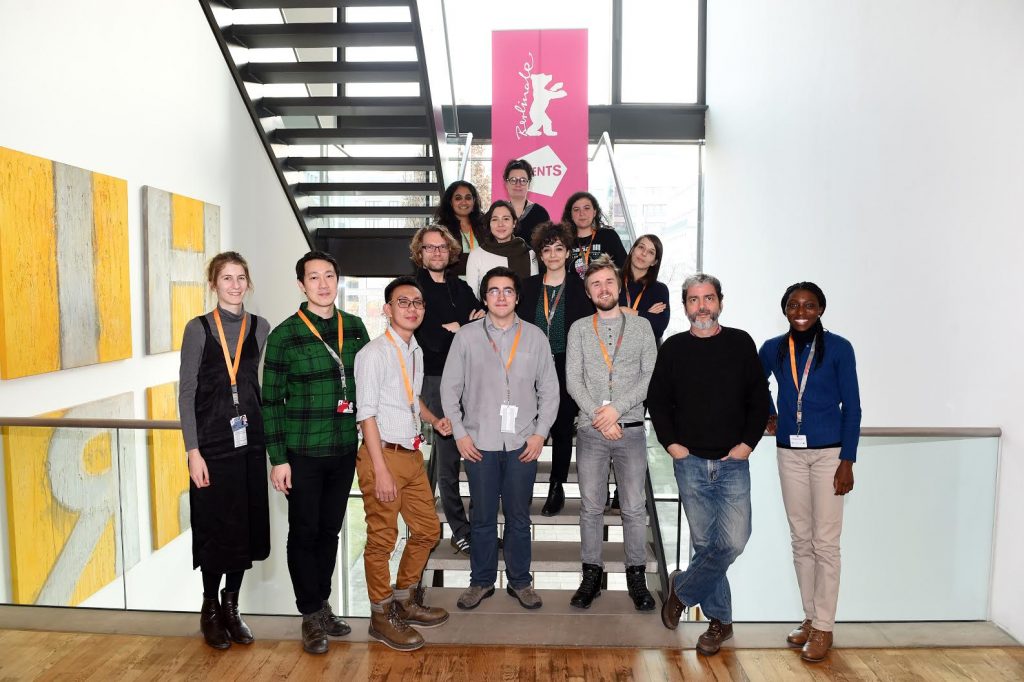 END_OF_DOCUMENT_TOKEN_TO_BE_REPLACED

Around this time of year for each of the past five years, I’ve produced a multi-part series of video essays arguing for who should win the Academy Awards in the major categories. This year, for a number of reasons, I decided not to produce the series. But as part of my ongoing personal archive project, I’ve collected all 32 video essays that I produced into a Vimeo album.

If I had to pick one of these 32 video essays to represent this body of work (not necessarily the best video; I’ve put that one at the very bottom of this entry), it would be this one looking at the Best Lead Actress nominees of 2014. Producing this video essay led to publishing my first feature article in the New York Times, based on research conducted in relation to this video with regard to screen times of the nominees.