Film critic Andreas Busche recently asked me if I had ever met Harun Farocki. I met him exactly once, almost exactly five years ago, during the 2012 Berlinale. It was at the premiere party for the film Barbara directed by German director and Farocki collaborator Christian Petzold. It was a festive but distracting environment full of people, so I don’t remember much from the exchange. (I had a more significant conversation with his partner Antje Ehmann, who said some nice things about “The Spielberg Face,” which I had just recently published.)  But yes, I can say that I met Harun Farocki, though it happened haphazardly and despite a more deliberate (albeit equally awkward) initial attempt to do so… END_OF_DOCUMENT_TOKEN_TO_BE_REPLACED

END_OF_DOCUMENT_TOKEN_TO_BE_REPLACED

One of the aims of the Harun Farocki Institut is to support archival activities, chiefly concerning Farocki’s personal and professional archival materials, but also to the critical study of moving images at large. In this spirit, I’ve spent some of my time in my residency undergoing a personal archival project, uploading and cataloging all of the 300+ video essays I’ve produced over the last ten years to my Vimeo account and linked to my personal website. So far I’m a third of the way through this project.

As I go through this cataloging process, I think about how to make these videos most useful and accessible to anyone who happens to encounter them. I’ve tagged each video with keywords corresponding to the historical period of their subject (i.e. 1920s for a late silent era film), as well as genre, geographical or national origin, or filmmaking topic (e.g. acting and performance; cinematography). Part of this is to diagnose what my own prevailing topical interests have been over the last ten years: how many video essays have I made about editing as opposed to narrative structure, cinematography or acting?  END_OF_DOCUMENT_TOKEN_TO_BE_REPLACED

Considered one of the seminal French texts on film and education, The Cinema Hypothesis: Teaching Cinema in the Classroom and Beyond by Alain Bergala is newly available in an English translation, published by SYNEMA Society for Film and Media, Austrian Film Museum. Here’s a Google translation of the book description:

“The former chief editor of the “Cahiers du cinéma” deals with the potentials, possibilities and problems of film in the school context without sacrificing his own deep passion for the cinema and his lifelong preoccupation with it.”

In addition to the translation of the original book, this publication includes an interview with Bergala conducted by Alejandro Bachmann of the Austrian Film Museum. In the course of the conversation Bergala comments on the current mode of videographic film studies (video essays) and divides them into two groups: 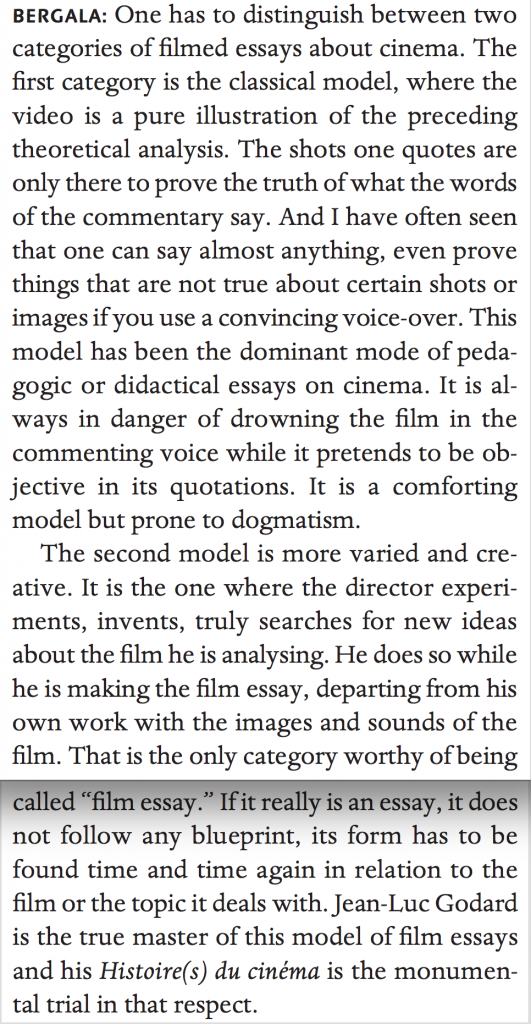 Further along in the book description, more words that resonate with me:

END_OF_DOCUMENT_TOKEN_TO_BE_REPLACED

This year the Rotterdam International Film Festival invited me to make a video essay to introduce their screenings of the film Jackie, directed by Pablo Larrain and starring Natalie Portman as First Lady Jacqueline Kennedy. I made this video essay “Not Another Camelot,” to trace the recent history of US First Ladies, and tries to answer the question “How did we get from Jackie Kennedy to Melania Trump?

The video got a really positive response at the film festival so I decided to publish it online.

Using a desktop documentary approach, I navigate through a series of online clips to show how different First Ladies performed the role differently, reflecting how the expectations for an “ideal” First Lady changed over the past six decades. It also shows the role that the media plays in shaping the ever-changing perceptions of First Ladies over the past 60 years.

I’ve accumulated enough books, articles and recommended readings in the past month that I am listing them here. 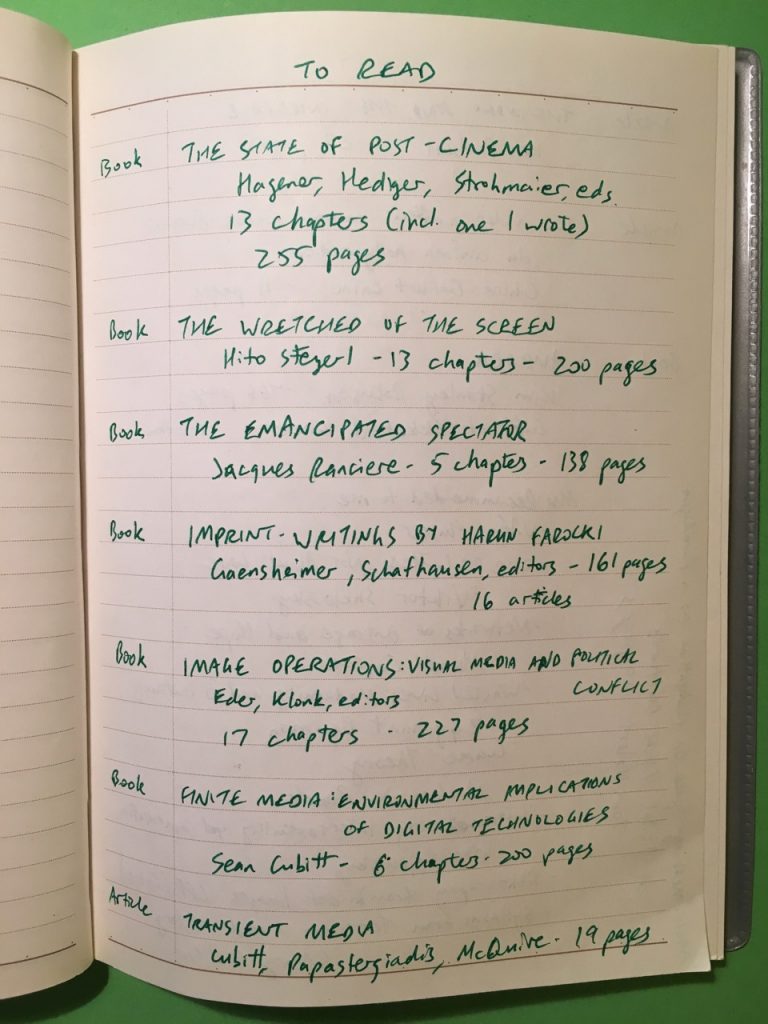 END_OF_DOCUMENT_TOKEN_TO_BE_REPLACED

There’s much to process from Thomas Elsaesser’s hour long talk on “The Cinema of Abjection” at the 2017 IFFR – much of which will be expanded upon in his forthcoming book on the topic. I wrote ten pages of notes, and reviewing them takes my thoughts in several directions, such as:

These issues are remarkably relevant to my current project, though to discuss it here may be to divulge too much. Instead I’ll offer six quotes from Elsasser’s sixty minute presentation that I found particularly striking and, when strung together, give a loose impression of the arc to his argument (though the actual presentation is much more in depth, to be sure):

END_OF_DOCUMENT_TOKEN_TO_BE_REPLACED

I spent the last seven days at the International Film Festival Rotterdam.  I’m writing this from a Vapiano next to the hotel where I stayed. Coincidentally I spotted Mark Cousins in this same Vapiano (it’s kind of reassuring to know that even Mark Cousins goes to Vapiano) sitting with a glass of wine looking like he was enjoying the time old art of people-watching, shortly before he was about to literally take an axe to his own creation following its penultimate screening. Here’s the script for his performance:

Mark Cousins unspools his entire script for his live narration to BIGGER THAN THE SHINING. Dana Linssen holds up the other end.

I could have said hi to Mark at Vapiano, but I had already had a very enjoyable encounter with him the previous evening, and frankly I’m exhausted from my stay here, so I’m hiding in a remote corner of the restaurant with my ratatouille penne and my laptop. In the past week at the festival I watched 14 features and 28 short and mid-length films. I’m not sure how to feel about this activity, because all this time spent watching films is time I could have spent working on my own projects. So it begs the question of why, given my own free choice, I spent so much time watching films.

END_OF_DOCUMENT_TOKEN_TO_BE_REPLACED

Here’s the poster for a talk that Chloé Galibert-Laîné and I will give regarding our current project, as part of the ongoing series “In Process-In Progress: Conversations About the Present and Future of the Moving Image.”

Event description follows below the image.