Here’s the poster for a talk that Chloé Galibert-Laîné and I will give regarding our current project, as part of the ongoing series “In Process-In Progress: Conversations About the Present and Future of the Moving Image.”

Event description follows below the image. 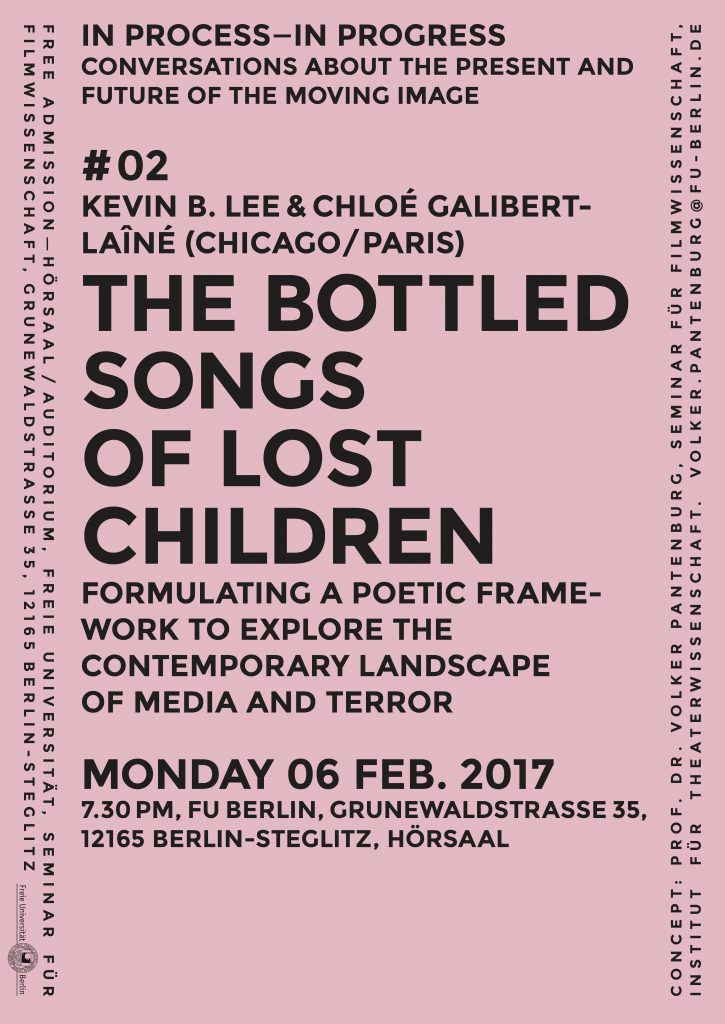 The Bottled Songs of Lost Children

– So how do we present this project? Usually these kinds of descriptions try to reassure the audience that they are in the presence of experts so that their time and attention won’t be wasted.

– And we are indeed no experts on the questions of terrorism… then our presentation should be precisely about the process of producing expertise on that topic, while resisting the rhetoric of authority.

– Yes, and it should also dramatize the ongoing question of how we situate and portray ourselves in the midst of our subject matter.

– .. and how we define our roles in relation to our audiences.

– So why don’t we perform a re-enactment of our nine months online conversation? Thus we could give the audience a sense of how the project evolved, as we tried to get our bearings in the wild field of terrorist media.

– And how we tried to find what… don’t know how to phrase it, but in French we have this very nice expression that literally means “it looks at me”, but actually means “it’s my business” or “it concerns/affects me”.

– So then I would say: how we tried to find, among this overwhelming audiovisual material, what was looking at us.

Chloé Galibert-Laîné is a French filmmaker and researcher. She is currently enrolled in the ‘research and creation’ PhD program SACRe at the École normale supérieure de Paris. She directed an award-winning short fiction film and produced several video-essays for Fandor. Her current academic and video work focuses on film reception, film memories, found footage and remix practices.

Kevin B. Lee is one of the most well known and productive protagonists in the field now known as “Videographic Film Studies,” or more generally, the “Video Essay” genre. Over the last ten years Lee has produced more than 300 short, analytical videos in which film reflects on film, sounds and images comment on, analyse and criticise other sounds and images. His “Transformes. The Premake” (2014) was screened widely on internatonal film festivals. He is currently staying in Berlin for the first Residency of the Harun Farocki Institut.