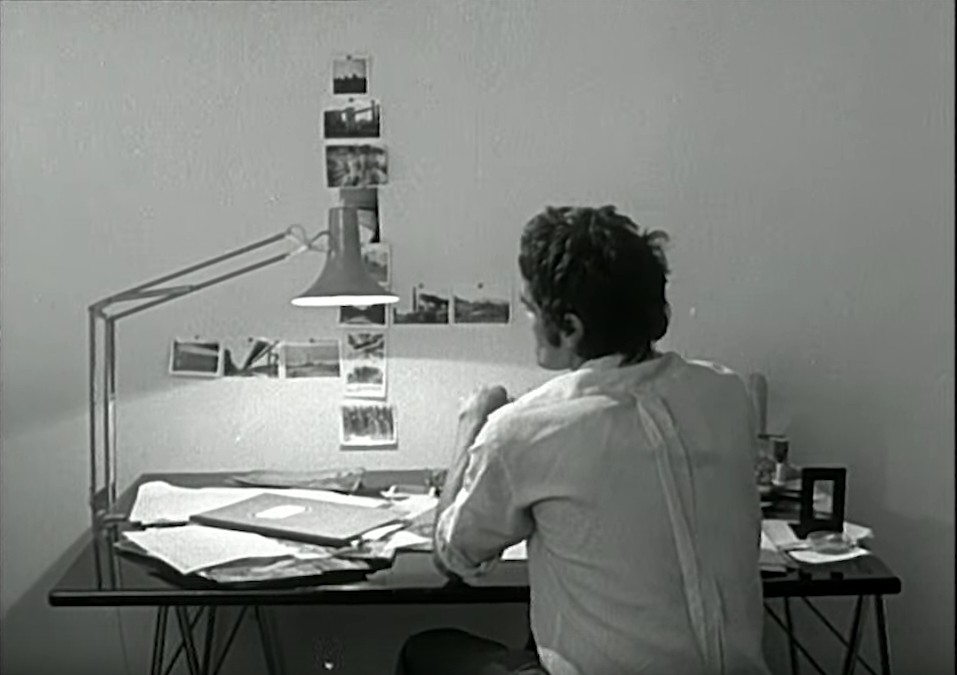 40 years ago Harun Farocki released his first feature film, Between Two Wars. At the beginning there is a striking shot of him at seated his work table facing an arrangement of photos on his wall. According to Antje Ehmann and Volker Pantenburg, these are research images for the production of Between Two Wars. 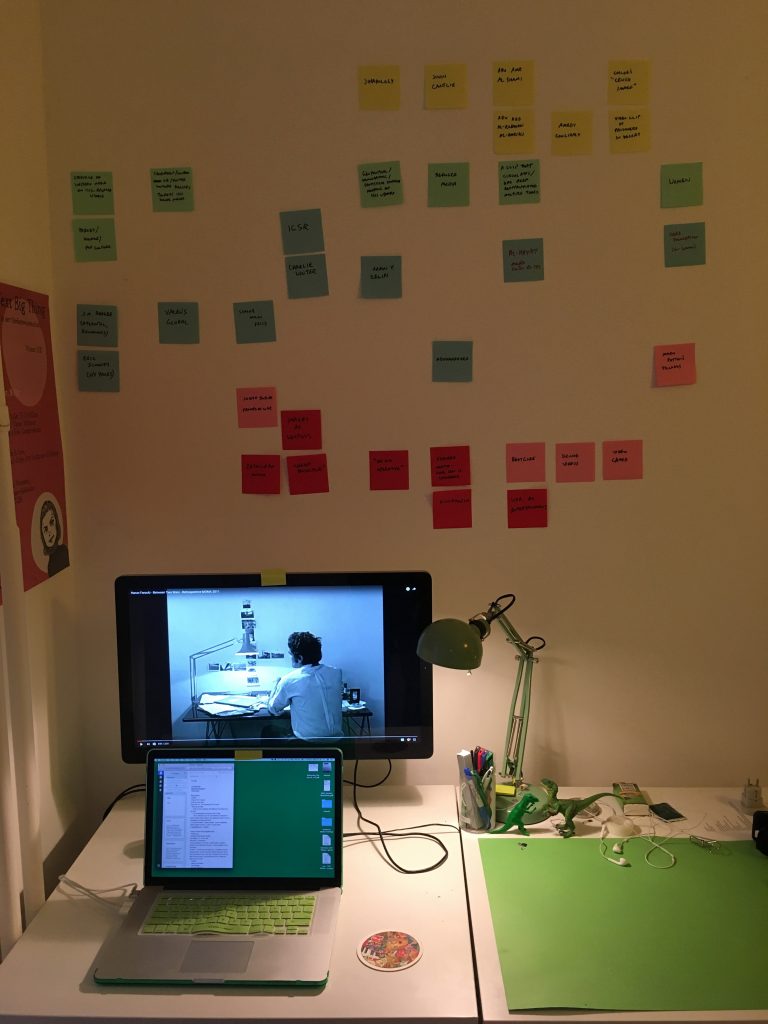 This is a photo of my work table in Berlin. On the wall are an arrangement of notes, each one containing a topic, an idea, a name. They are research notes for one of my current projects. Looking at the first image of Farocki contained in this image, I see the difference: he arranges images, I arrange words.

I wonder why I am not working primarily with images. It may have to do with subject of the project, terrorist media, whose images are not the kinds I’d want to decorate my wall. Or it could be a sign that I’m exploring this material within the realm of the abstract and theoretical rather than the concrete and material (if indeed we want to ascribe those qualities to images). Or it could be a sign of how one conducts research in 2017: not with material, but with keywords; that metadata can stand for data.

Unfortunately, for such a colorful indicator of activity, I haven’t made as much progress on this project as I’d wanted for this residency period. Now this period draws to a close and I am spending my last days mostly dealing with preparations for upcoming engagements, as well as producing a video report on my residency period, which may prove to be the most creative output of my residency (I’m using it to experiment with some smartphone filming techniques). It seems that the most significant work I did during the residency was talk about the residency: through talks I gave (12 events in 6 cities in four countries these past three months) and through this blog (which is nearing 45 entries, an average of one for every two days. Not bad given that at the onset I publicly questioned what a blog is even good for these days).

While I busy myself with this busy work, in the back of my mind I carry the image of Farocki at his desk in Between Two Wars, especially what he does with all the things occupying him on his table:

The things on his desk relate to work he’s had to do to make a living. They are images of pornography cluttering his table; I haven’t inquired whether these images are meant to be metaphorical or are literally what he had to work on at the time to earn money. (Incidentally, his work involved writing text to describe these images: again, an inversion of my process.) Much of my time in this residency has been spent thinking about the nature of working with images, and how the nature of the work reflects one’s values as reflected in one’s engagement with images. His act of sweeping all these materials from his table to pick up the script for his narrative feature, carries such decisive force, at once violent and clarifying.  Along with his similarly violent and decisive act of pressing a lit cigarette into his arm in The Inextinguishable Fire, it ranks among his most lucid expressions of cinema.

If words have been what have been cluttering my work table for the past three weeks, and what have been blocking my ability to engage directly with images, then perhaps now is the time to clear them from the counter. Here is a list of things I intended to write about on this blog but didn’t have time:

– Notes on Nachdruck / Imprint, a collection of writings by Farocki published in 2001. His essay “Shot/Countershot: The Most Important Expression in Filmic Law of Value” could be adapted into audiovisual form quite usefully, I think. This book appears to be out of print, but there are current plans to publish an even greater and more comprehensive collection of his writings in two volumes.

– Photos of the Farocki Institut. I’ll just share one image: 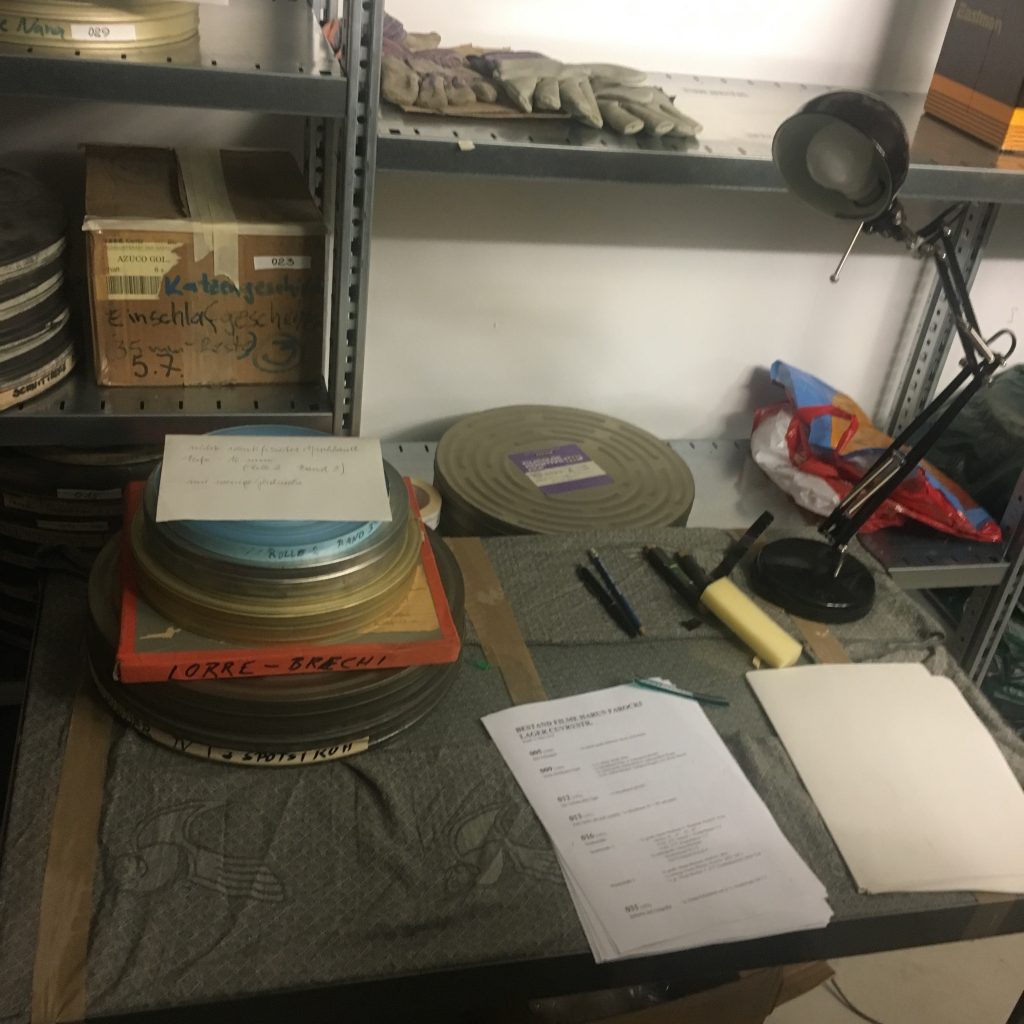 Another of Farocki’s worktables. I’d like to believe that it is the same one in Between Two Wars, but it doesn’t look long enough.
– As You See. The first title on my to-watch list of Farocki films that I have not yet seen. (I still haven’t seen it.)
– Notes on Tom Holert’s writing and presentation on navigation, in anticipation of a symposium on navigation being prepared for the fall.
– Searching “Farocki” on YouTube. This was a research project I intended to conduct during the residency, to investigate how many of his works have been uploaded to YouTube (without proper authorization by the rights owners), as a way to investigate the power relations involved in determining the accessibility of a body of work. As it happened, the time I would have spent on this project was unexpectedly taken up by securing the accessibility of my own body of work.
– Speaking of accessibility, last month I received an email from someone who is hearing impaired, asking if it was possible to provide subtitles for Transformers the Premake.
I was ashamed to have not done so already, largely because the work, particularly the desktop documentary narrative scheme, had been developed with the help of Joseph Grigely, an artist and mentor who is hearing-impaired. In his Research and Production seminar at the School of the Art Institute of Chicago, he had three interpreters providing live sign language translation of each presentation. I noticed the extent to which this was creating another layer of mediation to the experience; I wanted to find a way to bypass this layer and engage Grigely directly with my work. The answer was to show my research and type things on screen: desktop documentary.
I’m happy to report that subtitles are now available for Transformers: The Premake. Many thanks to Ellen Chisholm for performing the work.
– Notes on The State of Post-Cinema: Tracing the Moving Image in the Age of Digital Dissemination, edited by Vincenz Hediger and Malte Hagener. I contributed a chapter detailing the process of making and distributing Transformers: The Premake. The other 11 chapters are all illuminating in their own way, from Hediger’s account of the historical significance and geopolitical development of the Venice Film Festival, to a wealth of contributions examining cultures of film distribution in the Middle East and Iran; to systems of distribution in the worlds of art, cinephilia and queer culture.
– The online film journal Photogénie published a transcript from a two-hour conversation I had with Irina Trocan at the midway point of the residency:

Irina Trocan talked to video essayist @alsolikelife about the changing film culture and what might lie ahead:
https://t.co/yF4nV3if57

– Lastly, the idea of a “counter-image.” This is inspired by feedback given by Louis Henderson following a presentation that Chloé Galibert-Laîné and I gave on our project in February. He expressed the need to produce a “counter-image” that can make an effective response to the dominant images that form our initial subject. This idea of the “counter-” is quite firmly established by now in the worlds of experimental and essayistic cultural practices. It’s a term used by critics and scholars to describe Farocki’s work, and one Farocki implemented in his work. It can be linked to his expressed desire in Schnitstelle/Interface for “images to comment on images,” and to Counter-Music, a work whose title suggests a contemporary post-cinematic response/critique of the city symphony film.
Even in the notes accompanying the publication of Farocki’s “What Ought to Be Done,” the seminal document that informs the founding of the Harun Farocki Institut, the authors write: “As a collection point for documentary productions which refuse mass media or are rejected by them, Farocki envisaged a counter-institution.” This idea of the “counter-” occurs so frequently that it is in danger of becoming formulaic, the sort of conventionalization to alternative modes of inquiry warned about in “The Essay as Conformism” by Hito Steyerl and “Deviation as Norm” by Volker Pantenburg. So I’m left with the question of how to make the “counter-” truly count.
And so I take one last look at my countertop, and at Farocki’s sweeping gesture to clear the clutter from his counter and hold in his hands something that feels so essential as to be revelatory. So perhaps it’s not so much about producing a counter-image, as in producing an image that clears the counter. And ultimately, this clearing of the counter may not even be about producing an image, but a state of mind.